He earned his Ph.D. at the University of Utah, and is an Associate Professor of Creative Writing at Eastern Michigan University. He lives in Ypsilanti, MI with his wife, the writer Susan McCarty, an assistant professor at Oakland University.

Kirkpatrick lived in the DC area in the early 2000s. He has an MA in Writing from Johns Hopkins University.

“Matthew Kirkpatrick loves words and images and the crazy chemistry between them. Reading Light without Heat is like watching a circus act where humans fling themselves gorgeously from increasingly fantastic heights: you think uh-oh and wowee and yes yes yes.”—Noy Holland, author of What Begins with Bird

“Matthew Kirkpatrick’s new book is outstanding. The stories in Light without Heat are taut, formally inventive forays into the soft, fragile core of families. Kirkpatrick’s language is sharp and severe, but beneath the disciplined voice is a writer looking to reveal the most difficult feelings. An extraordinary debut by an ambitious new writer.”—Ben Marcus, author of The Flame Alphabet

“In pushing the possibilities of narrative, Kirkpatrick returns fiction to something almost before ‘the word’: to sound, to image, to the contrast of white space and the black of ink, dissolving his writing until it becomes a beauty beyond sense, beyond story.”–Robert Kloss, at Necessary Fiction

“Playful but not pretentious, occasionally elusive and consistently evocative, these pieces resonate on the same emotional plane as any conventional story. That Kirkpatrick seeks out new paths to emotional connection should fill any reader with gratitude rather than trepidation.”–James Tate Hill, at Bookslut

“Kirkpatrick can clearly pen a story that rivals the most anthologized of our short story writers, but also in his collection are heretofore unimaginable forms, stories that mirror the moment when you arrive late to a Surrealist tea party, and you’re not entirely sure which parlor game is being played. Ecstatic linguistic pyrotechnics, multi-dimensional constellations: a character sketch written as a diagram of the pineal gland, erasures that leave the text cratered, an impossible encyclopedia, ‘basements with or without dens.'”–Tasha Matsumoto, at HTML Giant 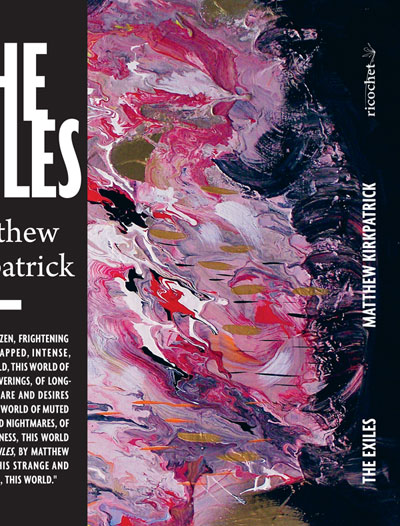 Review in The Ampersand Review

Review in The Collagist

“The buzzword nowadays in art-world circles is access—how the concerns and biases of the institution or curator affect which individuals feel welcomed within the museum space. In his first novel, Kirkpatrick (The Exiles, 2013, etc.) weaves a playful and compelling tale that addresses the issue holistically. . . . Rather than being led around based on the institution’s whim and fancy, we’re forced to discern how personal interactions shade our perceptions of art as well as whether the backers responsible for the space have any impact on the viewer outside of financials. Plus we get the surface pleasure of discerning how the author has constructed a plot within these parameters. A novel of ideas whose appeal goes far beyond its target audience—be it literary readers skeptical of yet another postmodern yarn or art-world enthusiasts jaded about its ivory-tower state of affairs.” —Kirkus Review

This site uses Akismet to reduce spam. Learn how your comment data is processed.